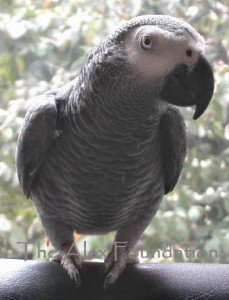 Known as one of the most famous African Grey parrots in history, Alex pioneered new avenues in avian intelligence. He possessed more than 100 vocal labels for different objects, actions, and colors and could identify certain objects by their particular material. He could count object sets up to a total number of six and was working on seven and eight. Alex exhibited math skills that were considered advanced in animal intelligence, developing his own “zero-like” concept in addition to being able to infer the connection between written numerals, objects sets, and the vocalization of the number. Alex was learning to read the sounds of various letters and had a concept of phonemes, the sounds that make up words.

Alex’s personality was very evident in his everyday life. He was “in charge” of his home and relished ordering “his” humans to perform various tasks for him. He also acted as a coach and cheerleader to his fellow birds, Wart and Griffin, alternately encouraging or admonishing them during their lessons. His favorite toys were cardboard boxes, key chains and corks.

Purchased from a Chicago pet store at the age of 12-13 months in June of 1977, Alex came from humble beginnings. His accomplishments proved that African Grey parrots have intelligence far beyond what was previously thought before his decades-long work with Dr. Pepperberg. Sadly, Alex passed away on September 6, 2007 at the age of 31 of a sudden, unexpected catastrophic event associated with arteriosclerosis (hardening of the arteries). It was either a fatal arrhythmia, heart attack, or stroke, which caused him to die suddenly with no suffering. There was no way to predict his demise. All of his tests from a recent physical examination, including his cholesterol level and asper levels, had come back normal earlier that week. His death could not be connected to his current diet or his age; our veterinarian said that she has seen similar events in young (<10 year old) birds who also were on healthful diets. Most likely, genetics or the same kind of low-level (impossible to detect in birds as yet) inflammatory disease that is related to heart disease in humans was responsible.

We miss him dearly.