In Memory of Wart

Since my last blog update, a great sadness befell us: our beloved Arthur “Wart” passed away. I’d like to thank all of those who reached out to us when we first announced his passing. It is comforting to know the community runs so deep. If anyone needs to reach out to during these sad times, we at the Alex Foundation and Pepperberg lab open up our hearts to you. 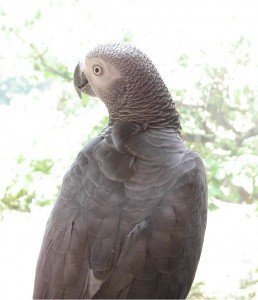 Before his passing, Arthur was treated with the utmost love, respect, and compassion any bird has ever experienced. From the ones lucky enough to have met him in person to those that knew him from stories and lived vicariously through his pictures, there was not one soul without a soft spot in their hearts for Wart. While we mourn deeply for his departure, we also smile, knowing that somewhere Wart flies blissfully with Alex and all the other lovely birds who have passed on.

We at the Pepperberg lab have attempted to stay strong and keep busy by working harder and not letting Wart’s contribution to the lab as a whole go to waste. If you have not had the chance, definitely take 20 minutes to check out our newest publication about some of the research Dr. Pepperberg performed with Alex. While other great papers already exist, this article stands out because it focuses more on Alex’s work with numbers. If you are not the “science type”, I would definitely start by reading the abstract, as it gives a pretty comprehensive and clear description of the article. What distinguished her research with Alex was that Dr. Pepperberg, like other colleagues, presented convincing evidence that primates were not the only animals able to evaluate complex problems related to language and communication. Rather than mere mimicry and repetition, Alex demonstrated a higher level of intelligence than before imagined. Another great area for additional reading, especially newer fans, is the introduction. It gives a lengthy tale about the history of behavioral studies with animals, Dr. Pepperberg’s colleagues, and her earliest thought processes about the research.

The following section leads into the bulk of the article, the research. In this first section, Pepperberg discusses some of the Alex’s earlier capacities before learning numerical information. Similar to a young toddler, Alex could make basic descriptions like color, shape, and matter. The next section relates more to the extensive amount of training that went into teaching Alex the concept behind 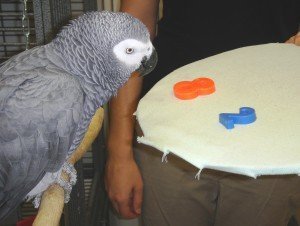 numbers; he had to learn to label an object based on how it was organized in a group, taking into account both physical appearance in a group and quantity. It continues by explaining the training methods employed, the unexpected way Alex counted, and his accuracy.

In his more advanced numerical studies, Alex was taught the difference between the number label and the quantity and the idea of “none”. Some of the most the most interesting findings came from the unexpected and unique process behind the addition of small quantities as well as Alex’s seemingly strong understanding of ordinality and equivalence without formal training. By far the most intriguing findings come from the studies involving the understanding of integral numbers and his ability to perform basic summation. All in all, this article reaffirms what we fans already know about Alex’s revolutionary contribution to animal cognitive studies. 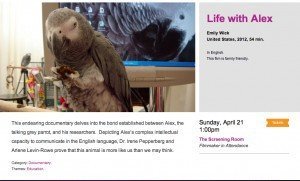 In other news, Life with Alex has been selected to screen at the 22nd Arizona International Film Festival (April 12-28)! We are excited to share this riveting and remarkable narrative of Irene’s and Alex’s adventures. Expect more updates about specifics from our Twitter and Facebook pages.

We hope you’ve been staying warm! Don’t fret too much, as the warmth of spring is just around the corner. While we close up this blog entry, I leave you with a quote from Leonardo da Vinci. He says that, “as a well spent day brings happy sleep, so life well used brings happy death.” While Wart lived shorter than anyone would have hoped, he lived his life to the fullest, reaping more happiness and accomplishment in just fourteen years than most men combined can say they’ve achieved in a lifetime. His spirit lives strong in all of our hearts, and resonates in all of our thoughts. Rest In Peace Wart.

You be good,
Eduardo 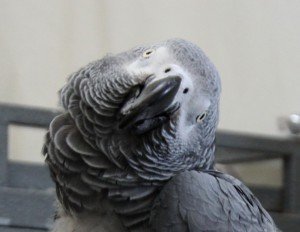 PS In honor of Griffin’s 18th Hatchday on April 14th, The Alex Foundation will be holding a sale on all gift shop purchases. Get an additional 20% off every item if you order between 12am and 11:59pm on April 14th!